Field sobriety tests are a battery of tests used by law enforcement to measure a driver's attention, coordination, agility and balance. While there are a number of different kinds of field sobriety tests, the ones most commonly used in Alameda include: 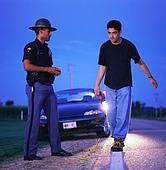 This test requires the individual to stand on one leg while the other foot is suspended about 6 inches off the ground. The individual then counts aloud by the thousands (“one-thousand and one, one-thousand and two,” etc.) until instructed to put the suspended foot down approximately 30 seconds later. The officer who administers this test is supposed to observe the individual, looking for signs of impairment that include swaying while balancing, using arms to balance, not counting in order, and/or hopping to maintain balance.

This test requires the individual to watch a slowly moving object such as a pen or small flashlight while the administering test officer moves the object back and forth. The administering officer then looks to see if the individual's eyes follow the object and at what point the individual's eyes begin to jerk. This test is supposed to indicate that when ‘nystagmus' (i.e., the involuntary jerking of the eyeball) occurs, the individual is intoxicated. When an individual is intoxicated, nystagmus is exaggerated and generally will occur at lesser angles. However, as with any field sobriety test, it is not 100% foolproof.

The Walk and Turn Test

This test requires the individual to take nine steps, walking heel-to-toe along a straight line with arms at the sides and while counting aloud. After taking these steps, the individual is then asked to turn on one foot and return walking back in the same manner. The administering test officer observes the individual from about three to four feet away, looking for any one of seven indicators — (1) losing one's balance while listening to instructions, (2) starting the test before instructions are fully given, (3) stopping to regain balance during the test, (4) using one's arms to balance, (5) not walking heel-to-toe, (6) losing one's balance while turning, and/or (7) taking an incorrect number of steps.

These three field sobriety tests are known as the ‘Standardized' Field Sobriety Tests as they are supposed to be administered and evaluated in a ‘standardized' manner. They are also classified as divided attention tests as the test subject is required to do more than one thing at a time, thus dividing his or her attention between both a mental and physical task. 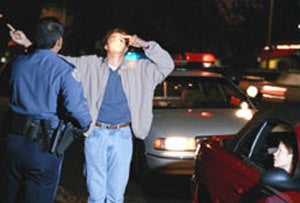 Field sobriety testing is used by law enforcement in order to establish that a suspected DUI offender is intoxicated. The administering test officers are supposed to be trained to identify specific ‘scoring factors' that are supposed to indicate whether or not a driver is intoxicated. Nonetheless, field sobriety tests in general are highly subjective and are based on the particular administering test officer's opinion. Other problems with these tests are that many people who have had nothing to drink are simply unable to perform them for one reason or another. Individuals with any kind of equilibrium problem or a foot problem most likely will not be able to ‘pass' the One-Leg Stand or the Walk-and-Turn tests.

Prosecutors often will argue that a suspected DUI offender's failure to perform well on these tests conclusively proves that the DUI offender was, in fact, intoxicated. However, studies conducted by the National Highway Traffic Safety Administration (NHTSA) have indicated that only 65% of those who exhibit two or more signs of intoxication actually have a blood-alcohol-content level of .10% or greater. In addition, there is much reliance on the issue that the administering test officer has been properly trained to administer field sobriety tests. In some cases, this is not so.

As experienced Alameda DUI attorneys, we will carefully examine the circumstances in which any field sobriety tests were given to you. If the administering test officer was not properly trained or is unable to prove that he or she had received specific field sobriety testing training, then in many instances, we will be able to get the results suppressed.

If you or someone you know has been charged with a DUI in Alameda and submitted to field sobriety testing, contact us today! We offer free Alameda DUI case reviews.